The Tibetan Macaque (Macaca thibetana) is found from eastern Tibet east to Guangdong and north to Shaanxi in China.  This species lives in subtropical forests (mixed deciduous to evergreen) at altitudes from 800 to 2,500 m above sea level.
The Tibetan Macaque is the largest species of macaque and one of the largest monkeys found in Asia. Only the Proboscis Monkey and the larger species of Gray langur come close to match their size among Asian monkeys. The fur is well-suited to the species' cold environments being long, dense, and brown on the back with creamy-buff to the grey coloration on the underparts. Some adults are quite a dark brown on the back, while others are basically a sandy yellowish-brown color. They have a prominent, pale-buff beard and long whiskers, but have a hairless face. 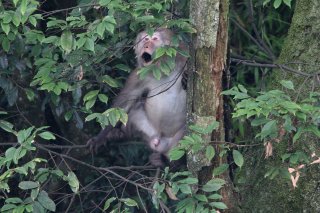