The Thick-tailed Bushbaby (Otolemur crassicaudatus) is a nocturnal primate, the largest in the family of galagos. As opposed to smaller galago species it would climb, walk or run rather than leap. This species is common in Southern and East Africa. The largest populations are found in Angola, Tanzania, southern Kenya, and the coast of Somalia. It lives in tropical and subtropical forests, preferring riverine and coastal forest, but it can also be found in the woodland savannah. It is a nocturnal, arboreal animal. During the day, it rests 5 to 12 meters above the ground in a dense tangle of creepers or in the hollow of a tree, rarely on an exposed branch.  At night, it emerges to forage for food. Its diet consists of fruit, seeds, acacia gum, flowers, insects, slugs, and even reptiles, small birds and mammals. 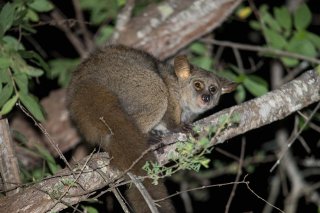 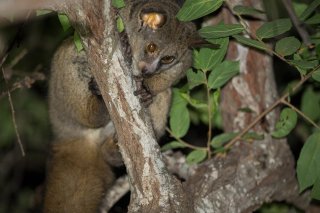