The Slender Mongoose (Galerella sanguinea), also known as the black-tipped mongoose or the black-tailed mongoose, is a very common species of mongoose.  The Slender Mongoose is found in the central and north-eastern regions of South Africa and through Namibia, Botswana, Zimbabwe, and up into East and West Africa. The color of their fur varies widely between subspecies, from a dark reddish-brown to an orange-red, grey, or even yellow, but these mongooses can be distinguished from other mongooses due to the prominent black or red tip on their tails. The Slender Mongoose Inhabits open woodland savannah, within which they favor more heavily wooded areas. Dens are established in disused termitaria, rock crevices, and hollow trees. 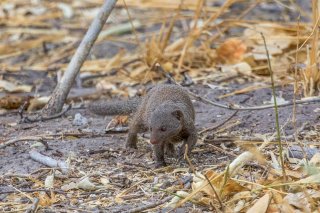