Grant's Gazelle (Nanger granti) is a species of gazelle distributed from northern Tanzania to South Sudan and Ethiopia, and from the Kenyan coast to Lake Victoria. The Grant's Gazelle looks similar to a Thomson's gazelle, except it is much larger and has lyre-shaped horns which are stout at the base, clearly ringed, and measuring 45–81 cm long. It is found in East Africa and lives in open grass plains and is frequently found in shrublands; it avoids areas with high grass where the visibility of predators is compromised. They also occur in semiarid areas and are relatively well adapted to dry areas, relying on more browse or leafy material during dry seasons to supplement their intake of water. They are migratory animals, but travel in the opposite direction of most of the other ungulates, such as Thomson's gazelles, zebras, and wildebeest, which are more water-dependent. They can subsist on vegetation in waterless, semiarid areas, where they face little competition. 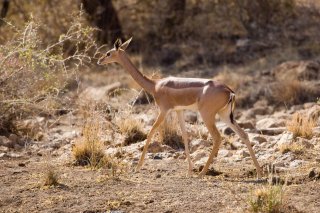 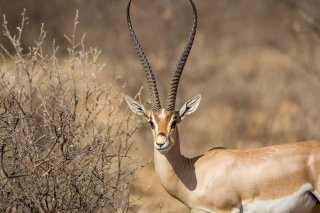 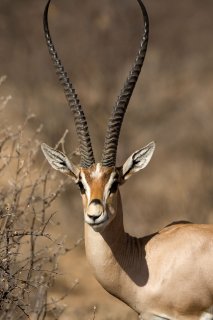 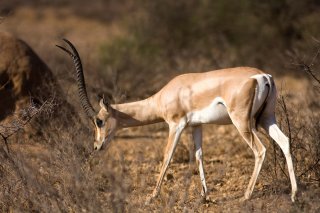