The Common Duiker (Sylvicapra grimmia), also known as the grey or bush duiker, is a small antelope found everywhere in Africa south of the Sahara, excluding the Horn of Africa and the rainforests of the central and western parts of the continent. Generally, they are found in habitats with sufficient vegetation cover to allow them to hide—savanna and hilly areas, including the fringes of human settlements. Breeding is year-round and the female gives birth to one fawn after a gestation period of 6 to 7.5 months. The Common Duiker has a wide diet; beyond herbivorous browsing for leaves, flowers, fruits, and tubers, they will also eat insects, frogs, small birds and mammals, and even carrion. As long as they have vegetation to eat (from which they get some water), they can go without drinking for very long periods. 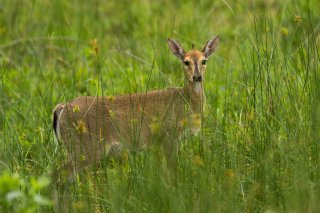