The Serval (Leptailurus serval) is a wild cat native to Africa. It is rare in North Africa and the Sahel, but widespread in sub-Saharan countries except rainforest regions.  It is characterized by a small head, large ears, a golden-yellow to buff coat spotted and striped with black, and a short, black-tipped tail. The serval has the longest legs of any cat relative to its body size.
Active in the day as well as at night, servals tend to be solitary with minimal social interaction. Servals are carnivores – they prey on rodents (particularly vlei rats), small birds, frogs, insects, and reptiles. 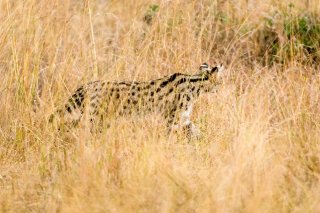 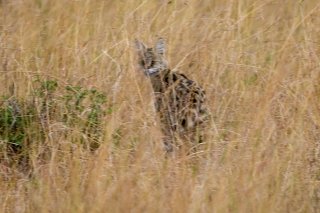