The Cape Hare (Lepus capensis), also called the desert hare, is a hare native to Africa and Arabia extending into India. The Cape Hare is a typical hare, with well-developed legs for leaping and running, and large eyes and ears to look for threats from its environment. Usually, a white ring surrounds the eye. It has a fine, soft coat which varies in color from light brown to reddish to sandy grey. Unusually among mammals, the female is larger than the male, an example of sexual dimorphism. The Cape Hare is a nocturnal herbivore, feeding on grass and various shrubs. 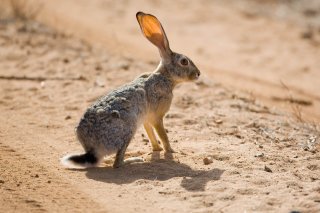