The South African Springhare (Pedetes capensis) is not actually a hare, but a rodent. It is native to southern Africa. The springhare resembles a small kangaroo (though unrelated) with well-developed hind legs, which allows it to leap over 2 m in a single bound. It gets its name from this ability. The color of this mammal varies from a reddish-brown to a pale grey, with a black tip on the tail. The springhare lives only in south-eastern Africa, feeding on plant matter and even occasionally insects. They have four toes on their hind feet with claws that look like small hooves; these are wider than those found on the forefeet. They have a thick, muscular neck supporting their short head. 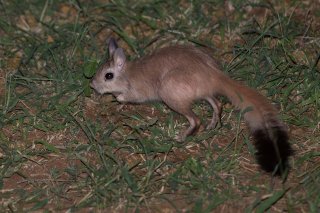 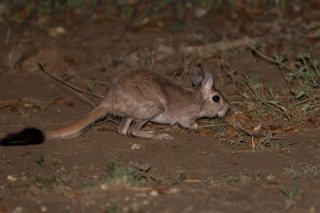