The European Ground Squirrel (Spermophilus citellus) is found in eastern Europe from southern Ukraine to Asia Minor, Austria, the Czech Republic, Slovakia, Serbia, Greece, Romania, Bulgaria, North Macedonia, and north as far as Poland but the range is divided into two parts by the Carpathian Mountains.
It is a diurnal animal, living in colonies of individual burrows in pastures or grassy embankments. The squirrels emerge during the day to feed upon seeds, plant shoots, and roots or flightless invertebrates. The colonies maintain sentinels who whistle at the sight of a predator, bringing the pack scurrying back to safety.
Breeding takes place in early summer when a single litter of five to eight young are borne. The European ground squirrel hibernates between autumn and March, the length of time depending on the climate. In preparation, they will build up reserves of brown fat during the late summer. 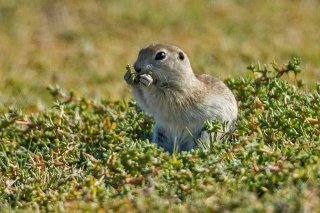 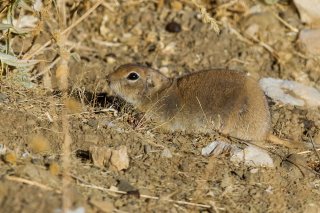